14th of August, afternoon. It’s a very special time in Nulvi, as S’essida de sos Candhaleris is about to begin.

A charming old village, Nulvi is located in the Anglona region in Northern Sardinia, not far from the coast and Castelsardo. We’ve felt the excitement in the air since the beginning of August, maybe earlier, at a time of the year when the rhythm of life is determined by the summer heat.

Nulvi has three Candelieri, tall ceremonial ’candlesticks’ representing each of the guild unions that shaped the local history. Sos Pastores (The Shepherds), as green as the fields in the spring, is the first to come out of St Philip’s Church and the last one to enter the Church of the Assumption. Sos Mastros (The Artisans) follows, blue like the sky in August. Sos Messajos (The Farmers), yellow like a wheat field, comes out last and is the first one to enter the Church of the Assumption. 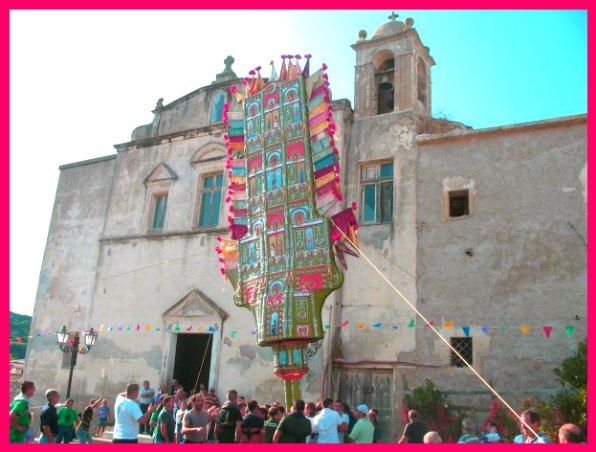 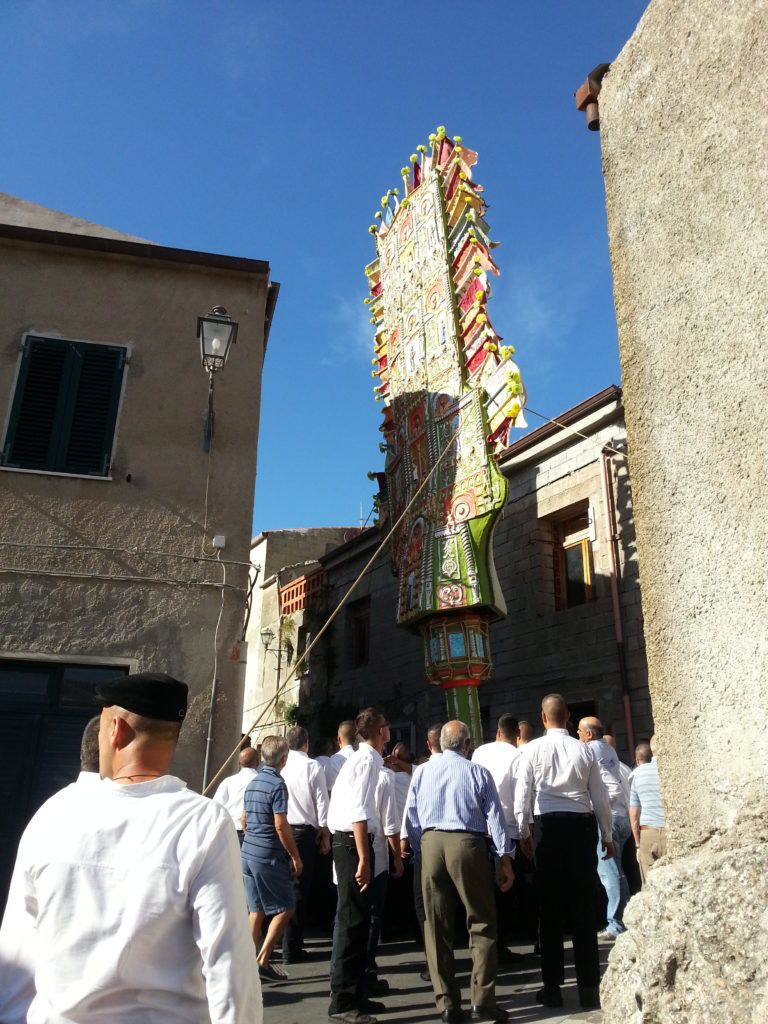 The Candelieri are finely carved, painted and decorated by a crown of votive pennants and roses in papier mâché. Sixteen men carry them on their shoulders in a procession. Not an easy task, when you consider that the wooden structures are 9 meters tall and weigh about 800 kilos. Additional men help keep the Candelieri stable by means of thick ropes during the ceremonial manoeuvers along the narrow streets of the old town. It’s quite moving. 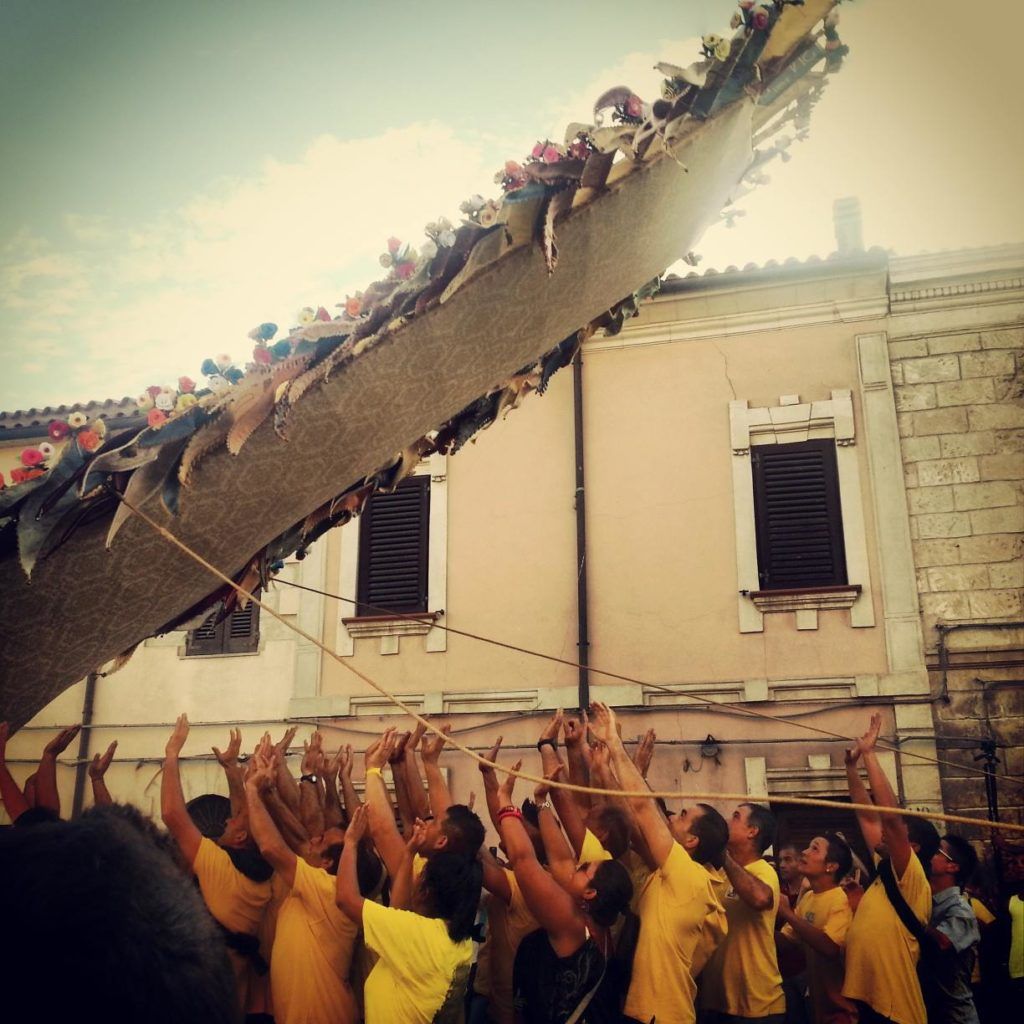 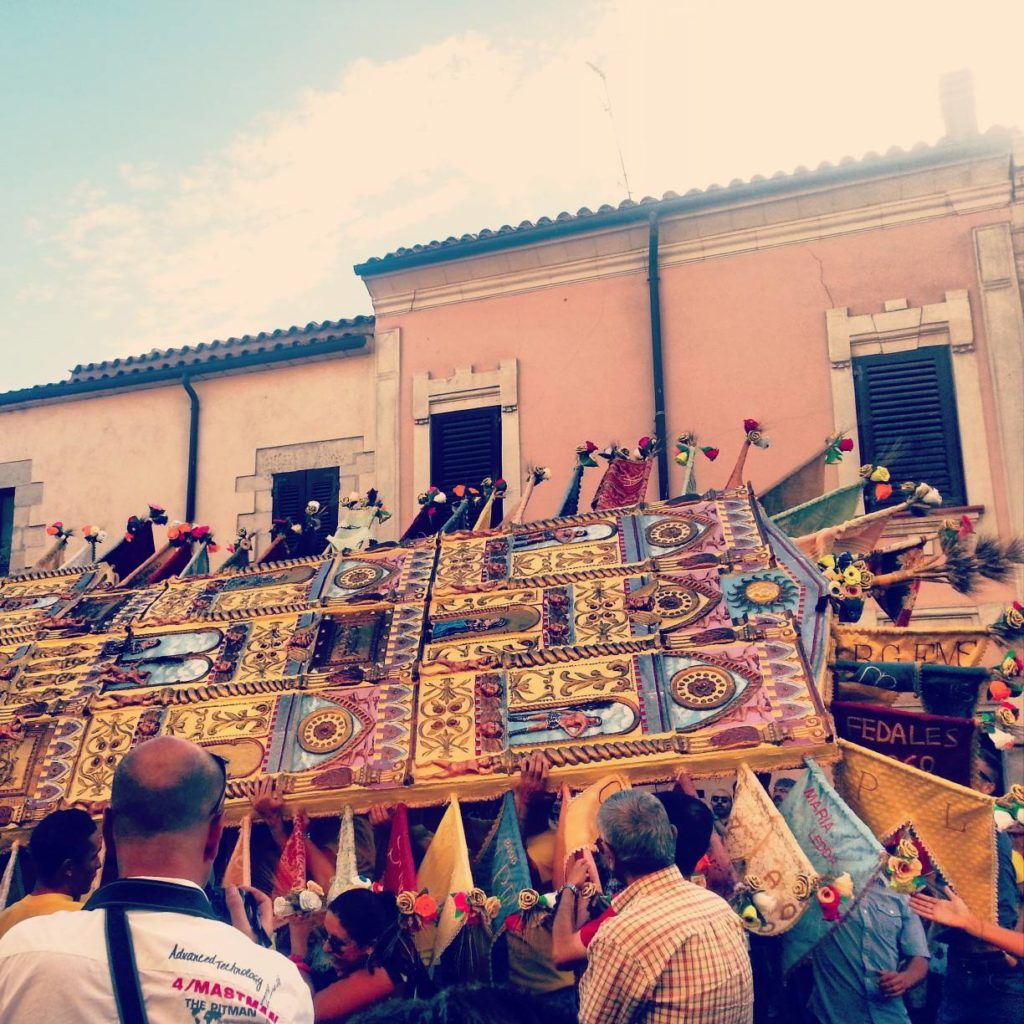 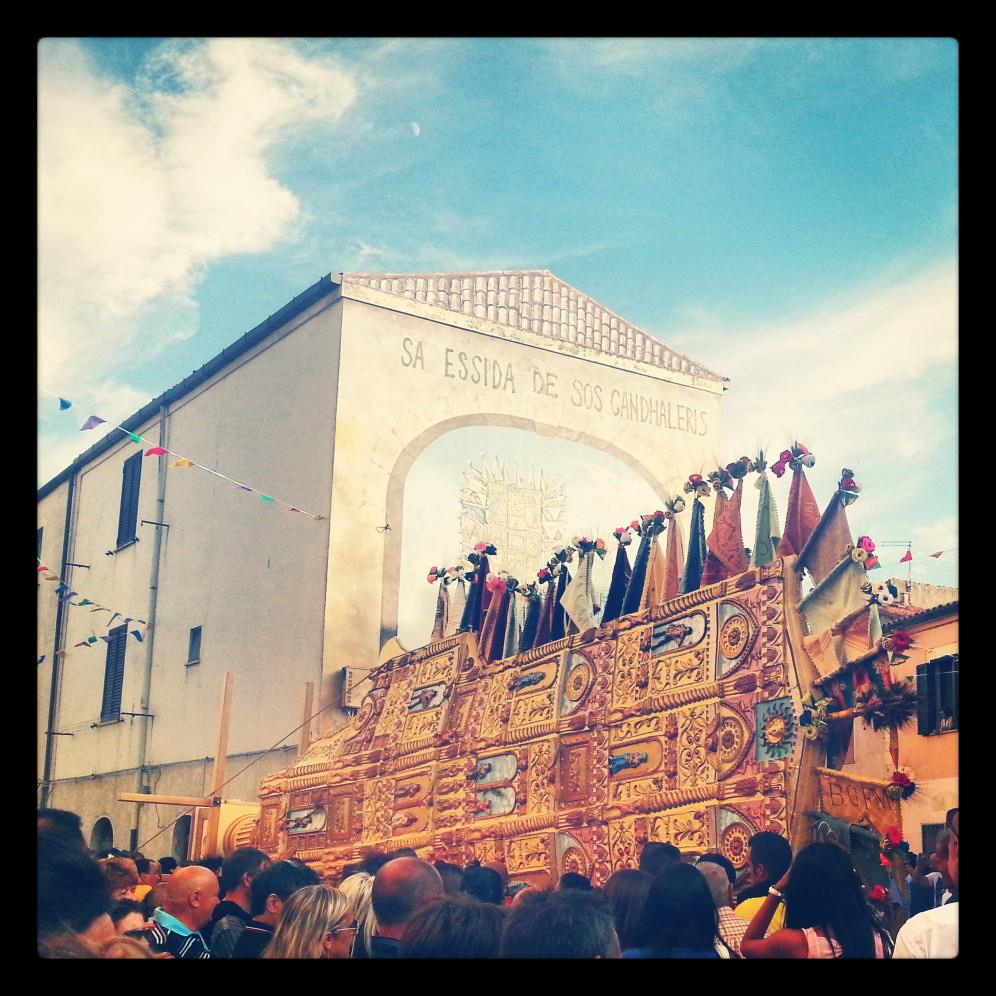 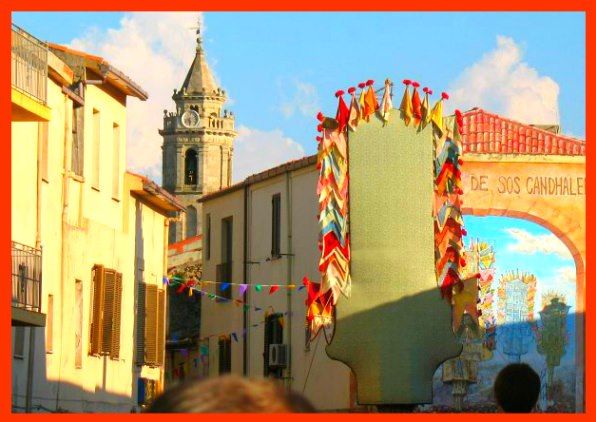 This celebration is believed to have originated in the 12th century, as a way to give thanks to the Virgin of the Assumption for the end of the plague. Every year since then, the whole community has renewed its vows and profound faith to Virgin Mary.

The bearers meet right after lunchtime at St Philip’s, a very old and delicate church where the Candelieri are kept. There’s a feeling of excitement and joy as people get ready for the great effort and honour of carrying the huge obelisks.

The bearers then parade through the old town. Some streets are very narrow; carrying the Candelieri here requires great ability and teamwork.

Loud orders are given to keep the rhythm. The bearers stop every now and then, including at the piazza in front of St Anthony’s Cloister, known locally as Cunventu ‘e subra. They cheer and sing a touching hymn to the Virgin.

Once the bearers arrive at Piazza Sant’Antonio, they take a rest and make a toast, then they get ready for the steep descent to the main street. Finally, they walk the last stretch and make a spectacular entrance to the Church of the Assumption. 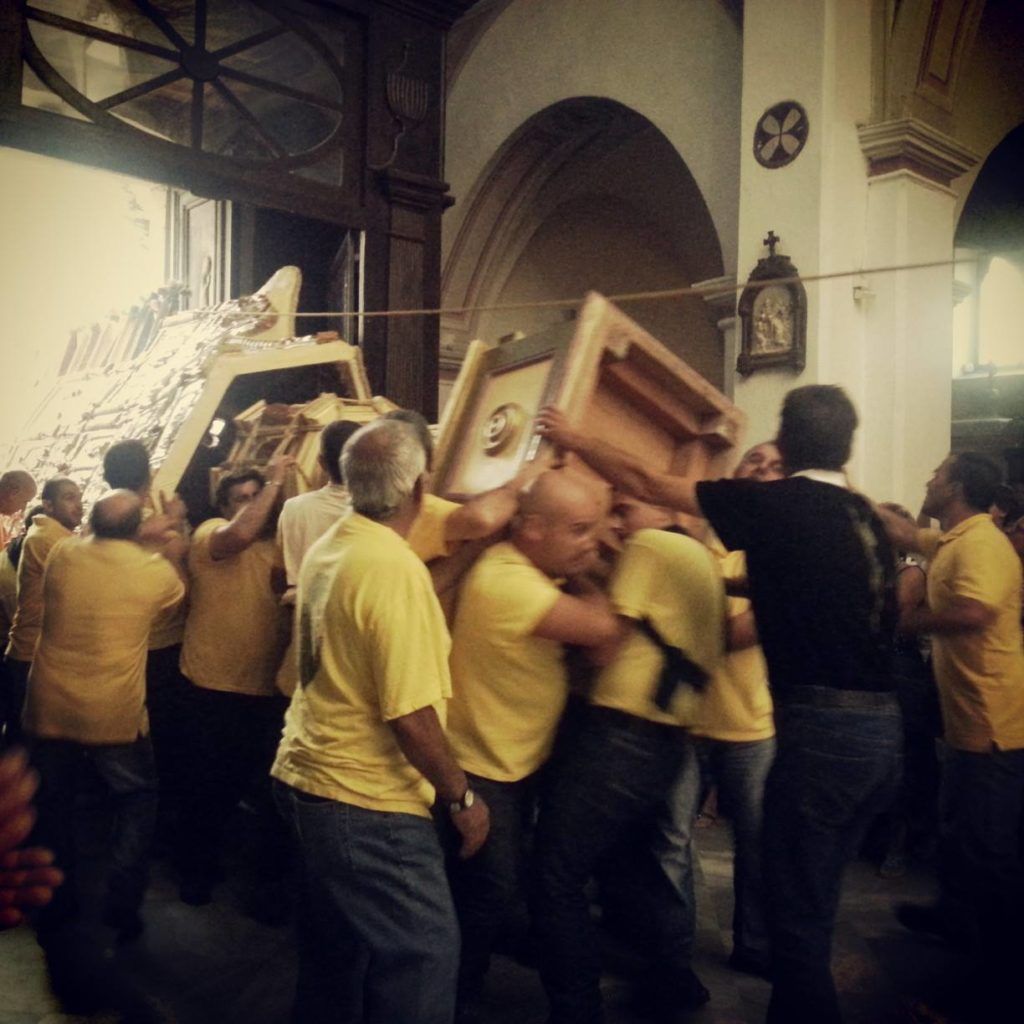 From this moment on, the Candelieri will stay at the Church of the Assumption for 7 days, guarding the Virgin’s figure while the inhabitants of Nulvi come to pay homage. On the 8th day, they will be brought back to St Philip’s and kept there until the 14th of August next year. 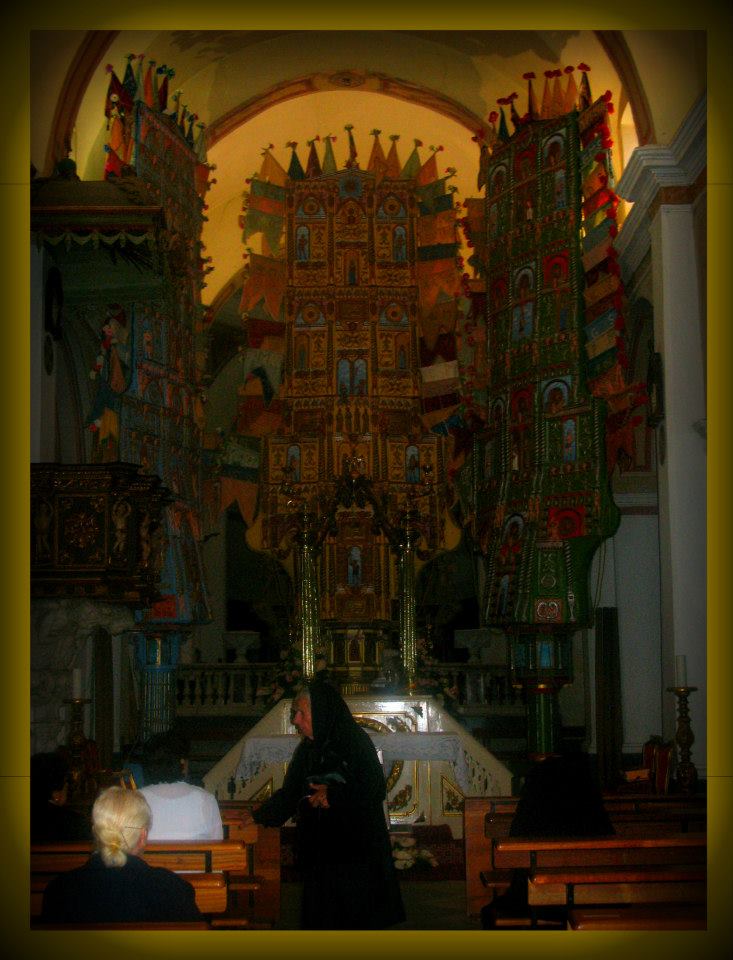 I’ve witnessed S’Essida de sos Candhaleris many times and I can assure it’s an intense and moving celebration. I’ve followed the procession around the maze of narrow streets in the old town, I’ve anxiously watched as the bearers dealt with the most challenging corners, I’ve savoured the intimate beauty of the alleys, I’ve shared the excitement in every step. No wonder UNESCO recognized similar celebrations as part of the world’s Intangible Cultural Heritage.

(Hail, Star of the Sea, Queen of Heaven! Nulvi bows at your feet).